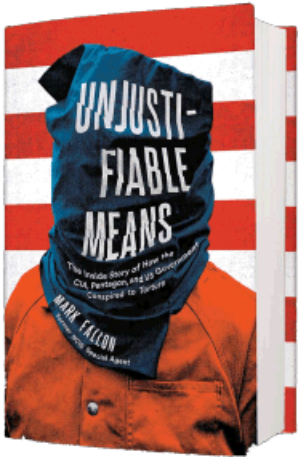 The Inside Story of How the CIA, Pentagon, and US Government Conspired to Torture

A true insider and a veteran NCIS agent, Mark Fallon was appointed the deputy commander of the Criminal Investigation Task Force (CITF) charged with bringing suspected terrorists to justice in the War on Terror. With the opening of Guantanamo Bay and the arrival of detainees, government agencies—including the CIA, Army, and NCIS—began infighting over whose jurisdiction the investigation fell under, and what the best method was for extracting information on al-Qaeda.

Fallon has exclusive insider information on the decision to implement “Enhanced Interrogation Techniques,” and the backchannels and deception employed to legalize these methods and hide them from the public’s view. Hard-hitting, raw, and explosive, Unjustifiable Means forces the spotlight back onto how America lost its way and exposes those responsible for torturing innocent men under the guise of national security—individuals who have yet to be held accountable for their actions.

F Y I ........... Here's a couple of published articles about the book and it's subject matter that you might find interesting.

IS THE TRUMP ADMINISTRATION CENSORING A NEW BOOK ON GOVERNMENT TORTURE?

Three years ago, the Senate Intelligence Committee released the summary of its torture report, replete with shocking details about the way the CIA once waged the war on terror. Yet it was only part of the story. Of the full 6,000-page report, only 525 pages were released to the public, and those were heavily redacted.

Today, there is much we still don’t know about the George W. Bush administration’s fateful decision to use torture as a weapon of war, including how the agencies applying the policy interacted with one another. But a new book could offer some insight—if the Trump administration ever permits it to be released.

The book, Unjustifiable Means, is a forthcoming memoir by Mark Fallon, a former official for the Defense Department and Naval Criminal Investigative Service. Fallon retired in 2010 after a distinguished 31-year career—much of it on the front lines in the fight against Al-Qaeda. Before 9/11, Fallon worked with the task force that investigated the first World Trade Center attack and was the leader of the NCIS team that probed the bombing of the U.S.S. Cole. After 9/11, he was NCIS chief of counterintelligence for Europe, Africa and the Middle East, and later served as the deputy commander and chief investigator of the DOD Criminal Investigation Task Force, which gathered evidence to prosecute terrorism suspects by military commissions at the U.S. prison in Guantánamo Bay. Given Fallon’s insider background, his book may be an incredibly important account of the policy failures that damaged our national security by helping boost jihadi recruitment, among other things.

Yet the book may never be released—or, if it is, may appear only in a heavily redacted, bowdlerized form. Fallon’s story is currently undergoing a pre-publication security clearance review. Ten agencies, including the Departments of Defense and Justice and the CIA, the three agencies most responsible for the torture fiasco, are combing through it. And some, myself included, worry that the censors may be more concerned about protecting individual reputations than improper disclosures. Fallon was initially promised this process would take no longer than six weeks; it has now dragged on for more than seven months, with no end in sight.

As someone who has closely followed—and participated—in the war on terror, I’m dismayed by the prospect of Fallon’s book being censored. When I was the Navy’s general counsel, Fallon was one of several NCIS officials who came to my office in November 2002 to present me with his concerns. He, along with NCIS Director David Brant and others, had obtained evidence that some Guantánamo detainees were being subjected to unlawful physical abuse during interrogations. If unchecked, they felt, the abuse would rise to the level of torture. Leaving aside whether torture was legal, they also felt that the harsh interrogation techniques being used were inherently counterproductive and demonstrated shocking incompetence. Lastly, they told me, the brutality was rumored to have been authorized “at the highest level” of the Bush administration.

The NCIS team in my office was composed of the types of officials that our nation values most: tough, courageous, capable and experienced people who are eager to combat the enemy and—no less important—faithful to the laws and values that define our country. None of them wanted to condone illegality, incompetence or dishonor, no matter how high the rank of the official ordering otherwise. By refusing to participate in and speaking out against the abuse of enemy captives, Fallon and his NCIS colleagues were defending their integrity and our nation.

Fallon, who believes that it is as important to learn from our mistakes as from our successes, continues to serve our nation. Unjustifiable Means delves into how key officials were able to manipulate governmental processes to adopt counterproductive policies; it recounts the leadership, ethical and moral challenges that he and others faced in telling truth to power and illuminates how torture contributed to the proliferation of the global violent extremism that jeopardizes our national security.

These lessons are critical. The Obama administration commendably banned torture, but it was mistaken in believing that we could erase the temptation to use these harsh measures without meaningful accountability. Now, we are led by a president who is an unabashed torture enthusiast, is appointing architects or apologists of the Bush-era interrogation policies to key government positions, has abandoned U.S. leadership on human rights and treats police brutality as a laughing matter. The slide toward brutishness continues.

Unjustifiable Means can help thwart that slide—if the Trump administration would release it already, in its unredacted form.

Mark's 2016 Op-Ed article published in HUFFPOST on the fight to end torture.

Congress Should Act to Solidify Ban Against Torture

At this point we all know that, in President Obama's words, "We tortured some folks." The Senate Select Committee on Intelligence's report on the CIA's rendition, detention, and interrogation program revealed shocking abuses that went far beyond even the torture that the administration had authorized. The Senate report represents a victory for transparency.

But the story doesn't end there. The government went to great lengths to cover for its official policy of abuse, and some of that is just now coming to light.

Just last week a group of dissident health professionals and human rights activists issued a report that contends that the American Psychological Association (APA) secretly collaborated with the CIA "to bolster a legal and ethical justification for the torture of prisoners swept up on the post-Sept. 11 war on terror."

After the 9/11 attacks I was appointed the Special Agent in Charge of the Department of Defense task force to investigate terrorists for military commission trials. In 2002, I became aware of cruel treatment of detainees, and I witnessed heroic, moral leaders who took a stand against torture--interrogators, law enforcement professionals, lawyers, and yes, psychologists. Unfortunately our warnings weren't heeded, and the administration continued its policy of brutality.

I want to make sure America is never in the same situation again, so for the last six years I've served on the High Value Detainee Interrogation Group (HIG) Research Committee, currently as chair of the committee. Composed of research scientists, government experts, psychologists, journalists, and human rights advocates, the HIG research committee studies the most effective means to lawfully and humanely obtain accurate and reliable national security information from high value targets.

The report on the APA sheds light on the fact that unless we as a nation close the loopholes that allowed torture to take place, proponents will continue to use any rationale to justify the practice. The attorney general or Congress should appoint an independent counsel to investigate if there was an intentional manipulation of the APA to give the CIA the legal cover for torture. An independent counsel would avoid the conflict of interest inherent when the government investigates itself and would have the ability to delve into the conspiracy of torture and the cover-up of torture related offenses.

At the same time, to make sure the United States never again sanctions torture, we need legislation. Next week the Senate Armed Services Committee will markup with 2016 National Defense Authorization Act. It should take this opportunity to ensure that all U.S. officials--including the CIA and the intelligence community--abide by humane interrogation standards.

Senator John McCain reminded us who we are as a nation when he took the Senate floor on the day the torture report was released. He said, "The truth is sometimes a hard pill to swallow....but the American people are entitled to it, nonetheless....We need only remember in the worst of times, through the chaos and terror of war, when facing cruelty, suffering and loss, that we are always Americans, and different, stronger, and better than those who would destroy us."

America isn't great because we never make mistakes--far from it. It's our ability to admit our mistakes and to recover from them that determines our greatness. The Senate report was a step in that direction, but we need to solidify the ban against torture to truly emerge from the dark side and stand in the light.