It all started in July 1981 when a young man in Harrison New Jersey, who at the time was working for the U.S. Marshals Service, got a letter from the Naval Investigative Service advising him that he had been selected to be a special agent and was to report to our Brooklyn New York Office for the grand total of $15,193 per annum.

From the first day that he walked into that office on August 10, 1981, Mark Fallon continuously demonstrated the skills, natural instincts and aggressiveness that over the next 26 years made him one of NCIS’ most prolific operators and operational bosses.

Whether he was in Brooklyn, or Subic Bay or Washington DC or Kings Bay GA or Philly or Naples, Italy or at Guantanamo Bay, Cuba, Mark Fallon had a legendary and I would dare say unparalleled string of operational successes during which he personally worked or led some of the most challenging investigations ever undertaken by the Naval Criminal Investigative Service. I am talking about true “make or break” investigations that had at a minimum national interest but most often significant and intense international attention. I could spend hours recounting these high profile investigations and proactive operations and in the interest of time I’ll not do that, but I want to give you just a couple examples of Mark’s work.

It was Mark Fallon who with only 4 years on board was selected to be the first case agent on the investigation into allegations of malfeasance and fraud by legendary Navy Seal Richard Marcinko. It was during this time period of the mid 1980s that I first met Mark when I was asked to come in and take over the investigation after Mark and his supervisors whom at the time were Byron Taylor and Harlan Rossman….had, well lets just say that had a difference of agreement on the direction that the case should proceed. Fortunately for me, Mark had done an exceptional job including an 18 plus hour interrogation of Marcinko that made it that much easier for my team and I to indict and ultimately convict Marcinko and others in U.S. District Court for Bribery.   Marcinko went on to write the best selling book “Rogue Warrior” in which he repeatedly referred to NCIS agents as Pencil Necked Geeks and I am pretty sure Marcinko was talking about Mark and not me……..

It was Mark Fallon who as a GS-12 squad leader of the Washington DC Field Office Special Operations Squad worked closely with DEA and others on joint investigations that netted the recovery of over $1 billion dollars in Narcotics.

It was Mark Fallon who in the early 1990’s took Kings Bay from a small Resident Unit to a full fledged NCIS Resident Agency Status which is no small feat and at one point he was working almost one hundred hours of overtime per month. I must quickly read to you portions of a letter that was written by the base commanding officer to then NCIS Regional Director Don Webb. The Commanding Officer wrote:

“In my five command tours, I have never worked with a finer NCIS SAC. While maintaining his essential independence and objectivity, Mark has certainly become a member of my team. He has broken down barriers to effective cooperation and has established an environment of mutual trust and confidence between NCIS, the Navy and the greater law enforcement community.”

It was Mark Fallon whose informant penetrated a major terrorist cell led by the blind Sheik Omar Ahdel Rahman during the joint FBI/NCIS operation Code Named “TERSTOP” and resulted in the prevention of a domestic terrorist act that was being planned by the group and the conviction and jailing of the blind Sheik for the rest of his life. Mark will tell you that this was probably his proudest moment as an NCIS Special Agent and it led to the first NCIS agent being permanently accepted onto a FBI Joint Terrorism Task Force.

It was Mark Fallon who was selected to lead the investigative task force in Aviano Italy after a U.S. Marine EA-6B aircraft severed the lines of a cable car at a ski resort killing 20 foreign nationals. This politically-charged investigation received almost daily international media scrutiny, and Mark masterfully developed strong working relationships with Italian counterparts, USMC prosecutors and others resulting in both the pilot and navigator being found guilty. Mark received the Superior Civilian Service Medal for his work on this one.

It was Mark Fallon who, on 12 October 2000, was selected to be NCIS tactical commander for the USS Cole Task Force after 17 sailors died aboard that ship in Aden Yemen. In this capacity, he worked for Director Tom Betro who at the time was the Deputy Assistant Director in our Counterintelligence Directorate. Here’s what Tom Betro had to say about Mark:

“SA Fallon has virtually been under a microscope since October 12, 2000. My difficulty is trying to somehow articulate clearly and precisely the significance and impact of his work which I fear is an impossible task. In the chaos that existed in the immediate aftermath of the attack on Cole, SA Fallon skillfully coordinated the NCIS investigative response to Yemen and the stand-up of the task force as well as managed the development and execution of the investigative strategy with the FBI, all with extremely positive results. It is necessary to underscore the magnitude of his accomplishment since the stakes for NCIS were high and it's not hyperbole to suggest that the stature of our agency would be judged for years to come by how these issues were handled.”

Lastly, it was Mark Fallon who, following the horrific events of September 11, was hand-selected by then Director Dave Brant to be the Special Agent in Charge of the newly formed joint DOD organization called the Criminal Investigations Task Force (or CITF as it is known) that was chartered to carry out the presidential order to investigate and prosecute members of Al-Quida, the Taliban and other individuals responsible for committing terrorist acts against the United States. Mark Fallon was the architect of the CITF and he built an organization which at one point totaled over 200 law enforcement and intelligence professionals which really did some cutting edge, pioneering work as it related to fusing of intelligence and law enforcement information that resulted in true “connecting the dots”.

I mentioned earlier that Mark says his most memorable achievement was the prevention of the terrorist act in New York. I would have to say that his most IMPACTING and ostensibly most courageous was disclosing the use of harsh interrogation techniques by other U.S. Government agencies at Guantanamo. I was Mark Fallon’s NCIS Supervisor during that time period, and remember his efforts to have the other organizations do the right thing and cease these tactics. When this didn’t occur, Mark approached me, we went to Director Brant who in turn went to Navy General Counsel Alberto Mora and the rest is history. It is clear to me, and many in government, that the history books that will be written years from now would have contained many more incidents of abuse, well beyond Abu-Gharib, were it not for Mark Fallon’s courage and commitment to truth and ethics.

Mark had always been an incredible advocate of training and in 2005 we sent him and the family down here to FLETC where he’s been our Director of Training. Since most of you have been here with or around him I won’t go into detail about his amazing accomplishments here but the bottom line is that he darn near transformed everything about our academy. Through his persistent focuses, leadership and great work by his team, NCIS now has an academy that has been accredited by FLETA. Our SABTP will receive accreditation next month and our training budget has increased 3 fold in the 3 years he’s been here.

On a personal note, Mark Fallon has been one of, if not the, closest advisors and friends I have had since we were both ASACs together in 1996 at Naples Italy. Over the last 10 years, he and I have shared our most personal and professional successes and failures. Preparing for these comments tonight made me contemplate why it was that I bonded so closely with Mark and I came to realize that it was because Mark represented and lived the professional attributes that I so admire; traits such as commitment, integrity, loyalty, sacrifice, innovation and leadership.

So for me, this is an emotional night because it is the final act that will close the active career of one hell of a NCIS Special Agent and the realization that Mark will no longer be carrying the same badge and credentials as I. It does give me some solace in knowing that he has obtained a Senior Executive Service position that will still permit him to greatly impact NCIS and the other 80 plus partner organizations at FLETC.

In closing, I am reminded of the words of Benjamin Disraeli who once wrote, “They may not remember what you said, but they absolutely will remember how you made them feel.”

Mark, on behalf of everyone here and myself, we will not forget how you made us feel and thank you for the honor and privilege of serving with you.  Thank You. 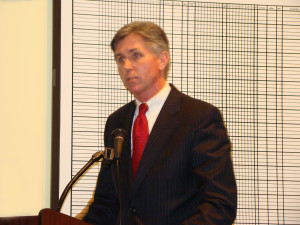 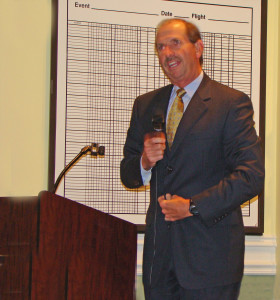 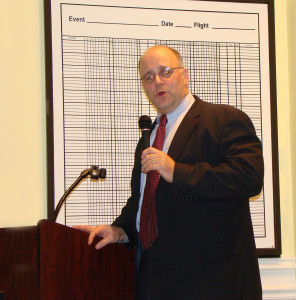 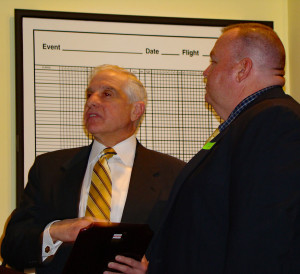 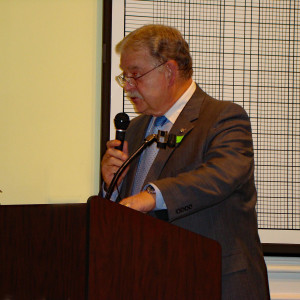 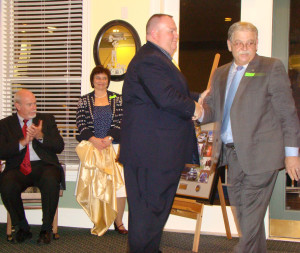 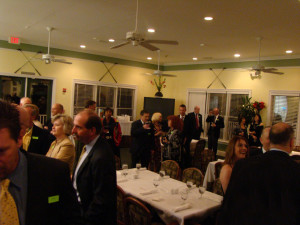 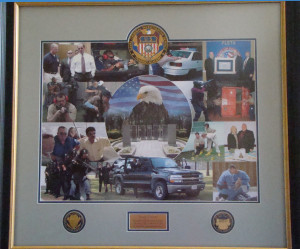 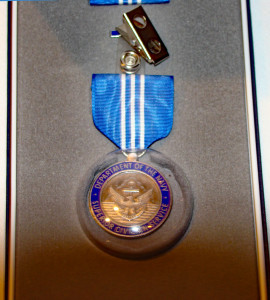 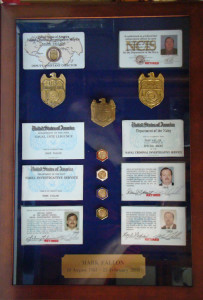